New Binaries has been released with some bug fixes. If u find any problems/bugs, pleae let me know.

NOTE: This program must be run as Administrator. right click the file
and select run as Administrator.
This is not a transparent file system driver jusr a user space tool.
The LVM2 metadata can be complex because of the wide variety of configuration posibilities. All configurations has not been tested. If Lvm2 does not work in your system, please file a bug with your LVM2 metadata.

we are pleased to announce a new version of our ext2read project
which we created 6 years ago. we were motivated to redsign and rework the project after i installed
the new ubuntu karmic. By default it used Ext4 file system with Extent feature enabled. we could not find any tools to read ext4 filesystems from windows . So we went ahead and wrote this program.

Earlier Ext2 and Ext3 had the limitation on the size of the file. It used 32 bit block number to access the data blocks. So that limited the maximum size of file to be 2^32 * blocksize(eg. 4k**) = 16TB*. Also the access time for large Files were slow because in had to go through lots of indirection.Ext4 Filesystem can support very large files it has 48 bits to adress a block. Also its uses extents to store data so access time is faster for large files.


How to determine if the Filesystem uses Extents or indirect Mapping?

To determine whether the inode has extent based mapping or indirect mapping. We need to look at the EXT2_EXTENTS_FL bit in the i_flags in inode structure. The root directory always has the indirect mapping instead of the block mapping.

What does the Ext4 Extents Data Structure Look like and where it is stored?

In extenxt based block mapping, the i_data of inode contains Extent structures.  There is a extent header, Extent and Extent index. The following structures define those structures.

(NOTE: They are stored as little endean and Linux code has __le32 types used)

The Extent is implemented as a B+ Tree. Only the leaf nodes has the Extent Structure. Others have Extent Index Structure. The extent information starts with the header and then either Extent or Extent Index.In the i_data there is only space for header and 3 more Extent structures. If more extent information needs to be stored, than whole bocks with extent index structures are used. In the non leaf nodes, extent index structures are used. It contains the block number of the block where next level of nodes are stored.
The logic can be described by the following 2 figures. 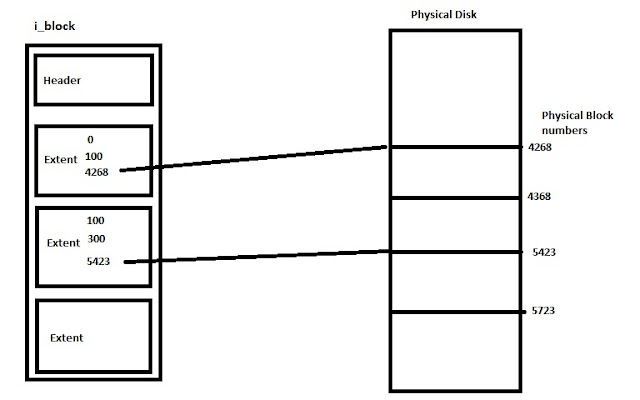 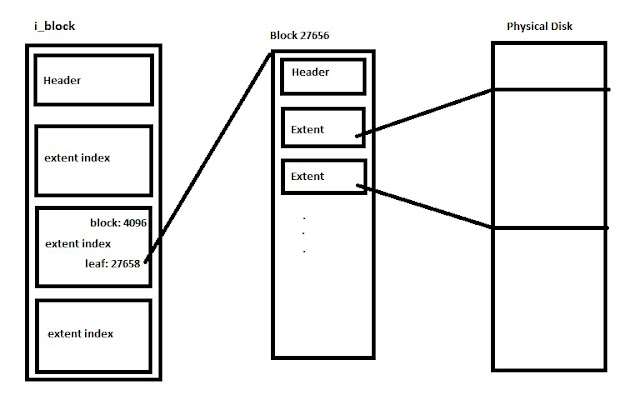 The eh_magic field in the header is always 0xf30a (little endean).
The eh_entries field determines the no of valid extents in that extent array.
The eh_depth is the depth of the B+ tree. if the depth is 0, the extents in that array are always extent structures and not the extent index structures.

I have implemented this feature in ext2read project (http://ext2read.sf.net).It hasn't been tested yet though for very large files. The Ext4 also uses HTree for directory entries. I am currently studying it and implementing.

Please let me know if you have any questions.
Manish Regmi (regmi dot manish at gmail dot com)

It looks like the application does not work with Ext4 partitions. I am currently working on Ext4 and LVM support. I am completely redesigning the GUI now With QT4. Stay tuned....
Posted by Unknown at 8:56 AM 723 comments:

To provide an efficient and convenient access to the files, the operating system imposes one or more file systems to allow data to be stored. Linux uses Ext2 (Second Extended File System) file system (it also supports tens of other file systems like fat, ntfs e.t.c.). Recently the ext2 file system has journaling support and called Ext3 file system (though the most data structures are same).
This tutorial will try to show you what is inside the hard disk. What is inside the Ext2/3 file system? And how our program works?

This part of the text will tell you the organization of the hard disk, how the partition information is stored in a dos/windows based systems. This text will also tell us how to retrieve the data from the disk and how ext2read does that.

Hard Disks are the most popular storage devices. We cannot imagine a computer without a hard disk. Hard disks offer high capacity and low costs.
The organization of disk.

In a disk, the data is stored in the surface of a circular disc called platters. The platters are double sided and the data is read by a read/write head. So, there are two heads per platter. There are many of them and each of them is divided into circular rings called tracks. The collection of tracks that are exactly above or below the other tracks is called a cylinder. Again each track is divided into a number of sectors (usually 64). Thus, sectors are the smallest addressable unit in disk. The disk can also be viewed as a large array of sectors.
Addressing the disk sectors.

The data in the disk can be addressed in mainly two ways. They are the CHS addressing and the LBA addressing.
The CHS (cylinder/head/sector) addressing uses the exact cylinder number, sector number and the head number to address a disk. The PC bios rely on this technique for booting the OS. The bios interrupt 0×13 function 0×2 (for details see Ralph brown’s interrupt list) can be used to read the disk using CHS addressing.
In the LBA (logical block addressing), the disk is viewed as a large array of sectors. The sector to address is number of sectors from the starting of disk. The first sector is 0. For reading the disk using LBA we use bios interrupt 0×13, function 0×42 (also called IBM’s int 13 extensions).
Reading the disk sectors

The disk sectors can be in many ways. Firstly, we can use the Operating System’s system call facility like open (), read () etc. Secondly, we can use IO instructions to read and write the IO ports of the disk (0×1f0 – 0×1f7 for 1st IDE). And thirdly using the bios (or DOS) interrupts.
Reading disk sectors from Dos

We can use bios interrupts to read the sectors in real mode OS like DOS. After inserting the values in the general purpose registers (function no. in AX, ) we call int 0×13. After returning from interrupt it will fill the buffer by sector’s content.
A C language example.
BOOL ReadSect(BYTE disk, int nsects,DWORD lsects,void* data)

In UNIX (and UNIX like systems) everything is file, so a disk is a file and is identified by a block device file /dev/hda (varies according to UNIX implementation). It can be Opened, read written and seeked as a simple file.
In Windows (NT), reading disk is similar to UNIX. The disk is identified as \\\\.\\PhysicalDrive0 and partitions as \\\\.\\c:. We simply open a file using CreateFile()(win32 API), read using ReadFile(), and seek using SetFilePointer(). Here are the examples.
/* Unix Implementation (User mode)*/
BOOL ReadSect(BYTE disk, int nsects,DWORD lsects,void* data)
{
int desc;
desc = open(“/dev/hda”, O_READ); /* file name differs from one implementation to other */
lseek (desc, lsects*512, SEEK_SET);
read (desc, data, nsects*512);
}

This part of the text will describe about the layout of the ext2/3 file systems and the data structures it uses. We will also look how ext2read uses those data.


The newer version of Ext2read is released. It is now an explorer like application from where you can read ext2/ext3 partitions.
Download the codes and executables.
Posted by Unknown at 11:31 AM 439 comments: